11 Labs Your Doctor Should Order to Ensure Optimal Thyroid Health 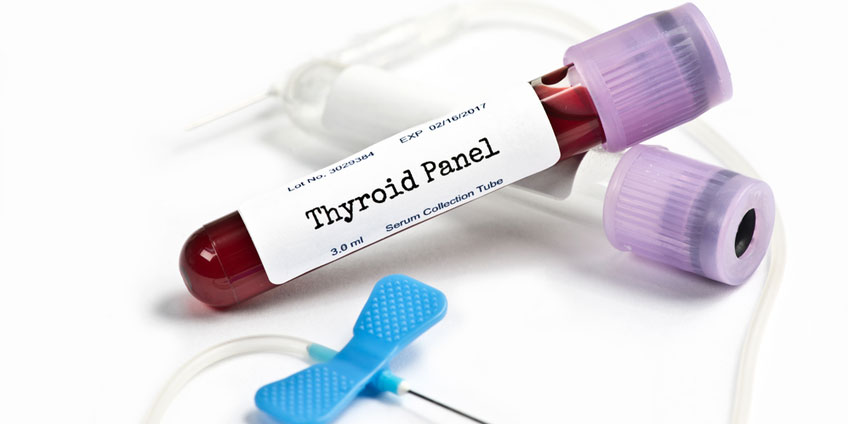 Many people are aware of the various problems that suboptimal thyroid function can have on your overall health. A common question I receive from people concerned about their thyroid function is, “What labs should I have ordered to see if my thyroid is where it is supposed to be?”.

Frequently, when you have your thyroid markers assessed at your primary care physician or endocrinologist, they will often complete a very basic analysis and then proceed to make general assumptions about the thyroid based on one particular marker, thyroid-stimulating hormone (TSH). Although TSH is an important lab to assess, it gives an incomplete picture of what’s going on with the thyroid and how it’s interacting with the rest of the body.

Today I will share the top eleven laboratory markers I find essential when assessing your overall thyroid health. I will also share the optimal adult ranges I shoot for in my practice to help people improve thyroid function.

The hypothalamus is a structure in the brain that is considered the control center for the body’s endocrine system. When the hypothalamus detects low levels of circulating thyroid hormones, it releases thyrotropin-releasing hormone (TRH) which then signals the anterior pituitary gland to release TSH. TSH proceeds to travel down to the thyroid gland where it binds to thyroid cell receptors and stimulates the thyroid gland to make thyroid hormones (primarily thyroxine or T4)1.

This is a tricky lab to interpret and confuses many people. It is important to remember that when TSH levels are low, it is suggestive of thyroid levels that are high. In contrast, when TSH levels are elevated, this indicates an under-active thyroid or hypothyroidism.

A simple way to keep the interpretation of this lab straight is to remember what TSH stands for, “THYROID SIMULATING HORMONE.”  It STIMULATES the THYROID to make more HORMONE when circulating hormone levels are low. Although this is a great indicator of what the brain thinks is going on from a thyroid standpoint, it doesn’t tell us much about the amount of hormone that is freely available for the cells to use for metabolism. It is not uncommon for people to have TSH levels within normal range with hypothyroid symptoms.

It is also important to note that the brain is a pretty intelligent design. I frequently see patients on thyroid hormone replacement with a suppressed TSH who are told by their practitioners that this is “normal” when on natural thyroid hormone. I don’t think that is the case. When the thyroid is truly balanced, all of the thyroid markers should be within optimal range. If one or more labs are not normal, this indicates something is out of balance. Before accepting a suppressed TSH as “normal,” be sure to look at the big picture ruling out nutritional deficiencies, toxins, infections, or other stressors that may be preventing your thyroid from functioning at full capacity.

Thyroxine or T4, is the primary hormone produced by the thyroid gland and is formed when four iodine atoms (which is why it is called T4) combine with the amino acid tyrosine. T4 is transported throughout the body bound to proteins produced primarily in the liver. The T4 hormone that is unbound and freely available for the body to use is called Free T4. Although T4 is the most abundant hormone produced by the thyroid, it is significantly less active than its counterpart triiodothyronine (T3). If you are lucky enough to get your practitioner to check another thyroid test, it is usually Free T4. The problem again is that this marker by itself is a poor indicator of how much active thyroid hormone is available for the body to use at a cellular level.

The thyroid gland produces significantly lower amounts of Triiodothyronine (T3) when compared to T4, but the T3 is what does the majority of the work. As with Free T4, the Free T3 represents the amount of active T3 hormone that is unbound to protein freely available for the cells to use for energy. T3 is the hormone responsible for the majority of the metabolic effects the thyroid has throughout the body. Since the thyroid doesn’t produce a significant amount of T3, the body has to convert circulating T4 to the active T3 through what is called the deiodinase system. Deiodinase is an enzyme that selectively removes iodine atoms from T4 to create the different thyroid hormones including T3 (three iodine atoms)2. This process of conversion from inactive T4 to active T3 occurs in multiple tissues and organs throughout the body but is most pronounced in the liver, gut, skeletal muscle, brain and the thyroid gland itself. It is not uncommon for people to have low Free T3 levels with normal TSH and Free T4. This is incredibly frustrating because your doctor will often tell you there is nothing wrong with your thyroid! As frustrating as this can be, they are not completely incorrect in their statement. When TSH and T4 hormone are within optimal range, and Free T3 is low, this typically means there is a problem with hormone conversion, not necessarily a problem with the thyroid itself. Remember, conversion occurs in the liver, gut, brain, skeletal muscles, and the thyroid. If there are problems within these systems like infections, inflammation, stressors, or deficiencies, the conversion does not occur. The Band-Aid approach is to take T3 hormone by itself. Although this may be necessary at times to help you feel better, it is still important to search for the root cause of why conversion is not naturally occurring.

Reverse T3 (RT3) is a critical marker to evaluate and is often elevated in the scenario where Free T3 is low. The difference with RT3 is that it is an inactive thyroid hormone. Although it is not entirely understood, the theory is that the body converts T4 to RT3 in times of psychological, emotional, or physiological stress in an attempt to conserve thyroid hormone. Nutrient deficiencies can also play a part in poor thyroid conversion specifically low selenium and zinc. The problem with the body’s conservation of hormones is that when the RT3 levels increase, the Free T3 (active thyroid hormone) levels typically decrease. This leaves people feeling fatigued, cold, with brain fog, constipation, and all of the many other symptoms of hypothyroidism. Although I generally look at a ratio of T3 to reverse T3, a general rule of thumb is to have RT3 levels less than 15 ng/dl with optimal Free T3 values. If RT3 is elevated, you need to identify and correct the stressors that are influencing the body.

Thyroid peroxidase (TPO) is an enzyme made in the thyroid gland and aids with the production of thyroid hormones. Thyroglobulin is a glycoprotein produced predominantly by the thyroid gland and also acts as a substrate for the production of T3 and T4 hormones. When the immune system places antibodies (or flags to tell the immune system where to attack) on these thyroid components, it is an indication that an autoimmune thyroid condition is occurring. Normally, the immune system has self-tolerance with the ability to distinguish the body’s own tissue from problematic pathogens (disease causing bugs). When autoimmunity occurs, this indicates the immune system has gone rogue and can no longer distinguish problematic pathogens from normal cells and tissues.

There are multiple nutrients involved with thyroid production and function. Zinc and selenium are two essential nutrients that are vital for the production of thyroid hormones and the conversion of inactive T4 to active T3. Zinc and vitamin A, along with exercise, help to improve cell sensitivity which allows the cells to take in the active hormone to use for metabolism. Vitamin A also activates the gene that regulates TSH production. When evaluating zinc and selenium labs, it is important to get red blood cell (RBC) markers. RBC levels tell you where the nutrients have been over the last few months as opposed to standard levels that just let you know where you are that day. My favorite test to evaluate nutrition status is the Genova Nutreval. This is a highly comprehensive nutrition panel that uses both blood and urine to assess vitamins, minerals, fats, proteins, and heavy metals among several other markers. Testing for deficiencies is an excellent way to make sure your thyroid and other organs have the nutrition that is necessary to function at full capacity. If you are low in specific nutrients, check out the Nutrient Specific Food Guide on my website which gives you a list of foods that are high in specific vitamins, minerals, fats, and proteins.

Ferritin is one of the most common lab values I come across where levels are low, and people are miserable. Ferritin is a protein that stores the majority of the iron that is not being utilized within red blood cells or muscle cells. Iron is essential for thyroid hormone production, but beyond that, low iron levels also contribute to many of the symptoms that often get blamed on low thyroid function. Having extreme fatigue, hair loss, shortness of breath, a weakened immune system, among several other problematic symptoms can all be seen with low iron. I typically find that people with a ferritin below 50 ng/ml are symptomatic, but I shoot for optimal levels between 70-150 ng/mL. Another thing to know about ferritin is that it is also what we call an acute phase reactant. This means that if you have systemic inflammation your ferritin will often be elevated. Too little or too much iron is not a good thing. This is why it is important to get a full iron panel that includes ferritin to make sure you are within that ideal range.

Iodine has to be one of the most controversial thyroid labs out there. For starters, there is no perfect test available for iodine. The iodine test I tend to rely on in my practice is a urine iodine level. I find this to be fairly accurate and reproducible. Without adequate iodine, the thyroid progressively enlarges and develops a goiter or nodules in an attempt to keep up with demand for thyroid hormone production. What is confusing about iodine therapy is the fact that some practitioners believe that very high super physiologic doses of iodine are essential to treating various thyroid disorders whereas others completely disagree with this approach. How do I approach iodine therapy? As I explained above, we know that iodine is essential to thyroid hormone production. With that being said, I am a strong believer that our Creator knew what he was doing and designed a pretty spectacular piece of art. My goal with therapy is to use laboratory testing to guide iodine replacement in an attempt to achieve optimal levels, and preferably with food sources.

It is important to remember that the thyroid is extremely complex and true balance often involves assessing and treating multiple factors. Sometimes the thyroid hormones are not being produced in adequate amounts. In other instances, they are not getting converted appropriately; and sometimes the hormones are present and in the correct forms, but receptor sensitivity issues prevent the hormones from traveling into the cells. I hope you find these ranges helpful in assessing your thyroid health. Remember that this is just a piece of the puzzle. When it comes to thyroid health, each person can have optimal levels that vary slightly depending on the individual situation. If you have a thyroid problem that you want to get to the root of, I would love to partner with you on your journey to optimal health.

If you’re ready to live your solution, check out our Adaptation Program to learn more about our approach and see if it’s the right fit for you